0
Votes
Undo
Before I get into this I saw this chart a while ago. This topic is controversial but I think statistics I saw shows that the majority is not always the most vocal part of the fandom and that includes every part of Supernatural. It goes to the other way too of course.

These pictures were very interesting in general because they show that Supernatural has male viewers (there goes that urban legend!) and the age frame where I belong to belongs to the minority too even if it's not the lowest. But these charts might explain why certain things are there at the show. 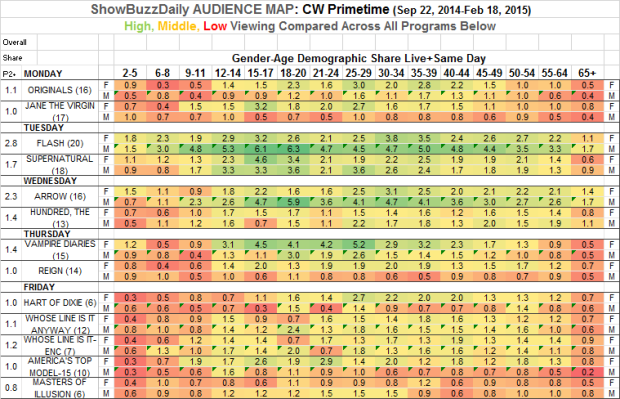 and this chart is cleaner and from: Geekiary So, what do you think about these charts? It does raise some questions and did at least for me. And of course a poll again.
Which age group do you belong?
(8 Votes)
Rate this post:
0
Tweet
Responses (6)

eilf
WFB Member
Accepted Answer Pending Moderation
1
Votes
Undo
This is interesting Lilah. I hope you don't mind but I have a few things that I feel should be acknowledged when using a data-set like this and which might change the emphasis. If the writers are going with uninterpreted data like these then I can imagine the show getting even less watchable next season. But these are raw data and have not been statistically analysed or inspected for logic. On the other hand TV networks use sweeps-week data to decide on advertising rates so maybe they do think as short-term as this.

I know you are trying not to take sides but one of the discussions going around at the moment is 'why shouldn't SPN have more teen girl characters'. and since there seems to be a preponderance of teen girls (and it seems to be part of your implication) I will take that angle.

My first issue is with The Geekiary - on their site they don't appear to mention the fact that this data shows only 14 or so episodes out of 215 total. It really should be an integral part of their graph (I am well aware of why they chose not to do so but I won't get into that here).

These data also indicate the point at which the ratings were the highest for this season. After Feb 2015 there is a drop off in numbers. Is it significant? Possibly. Significance is something that statistical analysis should be carried out to determine. Is the viewership the 15 year olds who watched the whole show up to date on Netflix and then lost interest watching it live - ie not a particularly stable marketing audience? Is it other viewers fed up with the change in style of the show towards teenagers leaving only the 15 year olds watching? Who knows? (perhaps Mark Pedowitz does considering what he said in the article in Variety last week) This is only a snapshot of data and honestly may not be statistically significant.

Then there are the demographics - for example who are all the 2-5 year old girls watching the show? What is their purchasing power? They are clearly being misrepresented as viewers - their mothers may be watching the show? Are the children and their mothers both being counted, or only one? Do the 2-5 year olds care that there are teenagers on their tvs? Should the writers be writing to this age group since it is there? If the 2-5 year olds watching are actually a bunch of 20-23 year old mothers the n that would skew the data.

The accuracy of the Neilson ratings is starting to be questioned since so many people watch time-shifted and media-shifted versions of tv. On the other hand maybe only traditional tv gets the show the advertising ratings so maybe the two cancel each other out. And I know that they are trying to change their analysis methods to keep up with viewing trends.

This chart only shows live viewing, it would be interesting to see how things change in the live +7 demo - though again it possibly depends on whether total viewers or marketable viewers is important. Is a 15 year-old watching a TV because they have no disposable income - to buy the things that are advertised - more important than a 25 year old who doesn't watch live but who can afford to buy SPN related merchandise, or buy the individual episode on Amazon, and more importantly will ALSO watch Arrow, The Flash and cheaper TV to produce such as Whose line is it anyway?

I find it interesting that there are no increased numbers of teenage boys on the show. So the writers are not REALLY trying to swing the age of the show lower. Though they may be trying to increase the appeal to the 20-29 year old (straight) male demo .... and look at that on the graph

I know a good few people who watch SPN - one is in her early twenties, 3 are in their thirties, I am in my early forties and I know 2 who are 50 or older (I don't think any of them will post on your poll but I have) I also know one guy and he is 40 (and gay, though that may not have any relevance to anything being discussed here

I know enough about statistics to be able to say you have to be careful with them and have to question what a data set might be saying and what it might prove. But I am definitely not an expert on how TV works and how demos can be interpreted so y'all are free to argue with any or all of the points I made here

Lilah_Kane
Accepted Answer Pending Moderation
0
Votes
Undo
Yeah, I know. That is why I actually made my own poll and the geekiary chart was second simpler example than the two above it, but yeah it was tossed for discussion and like I said. My age frame is also in the minority of that chart so not taking sides here. I am really bad in charts and also with viewer ratings that I can hardly understand how they work so I leave it to someone else. What I know about statistics and polls is that they count as percentage of the real deal (even if I can't understand it myself. I am really bad in math)

Proof is always better than mere words and well, these charts are not exact. I have my doubts.

eilf
WFB Member
Accepted Answer Pending Moderation
1
Votes
Undo
I went to the link (thanks!) and it turns out there's one for the full season: CW 2014-2015

You know what's interesting? Almost all the shows have a slump in 18-25 year olds. For SPN it bounces back to pre-18 year old levels for male viewers but not for female viewers. And for a lot of the others they bounce back to the pre 18 year old levels too (for both males and females I think). I wonder what that is about? College years and low TV viewing? But people watch more once they have kids? And responsible jobs, and an income?

If you graph only 18-49 there are more men than women viewers and the predominant age group is aged 25-29.

So basically, there are lies, damn lies and statistics ....

Lilah_Kane
Accepted Answer Pending Moderation
0
Votes
Undo
Nice, will try to copy it here also to see. Didn't have much luck with the image links up and can't edit. This full year would have been great. 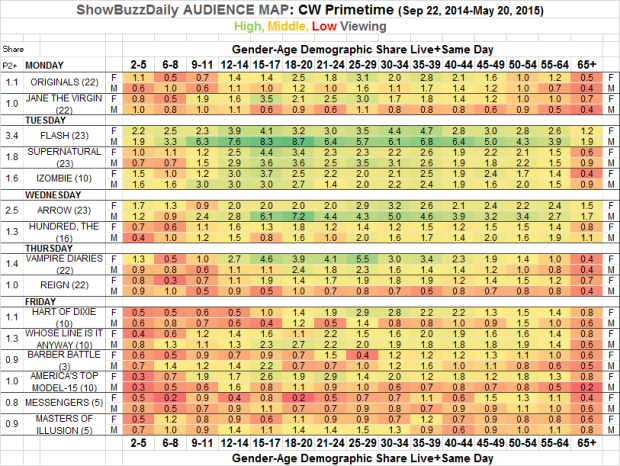 Melanie
WFB Member
Accepted Answer Pending Moderation
0
Votes
Undo
Hi -- Just jumping in the pool here. I love ratings stuff.
Very interesting information - thanks for posting Lilah. I'm amazed at how young skewing the female viewership is -- although I shouldn't be, my daughter and all her friends are obsessed with it -- they just didn't watch it when it first aired like I did.

Eilf, with regard to some of points you make -- household ratings data all comes from Nielsen, and this info includes Live and same day, which is time shifting until 3AM on the day a program airs. This particular chart apparently doesn't include Live plus 3 days or Live plus 7 day views, but the CW has that and the most important measure - which we never see -- Live plus 3 days commercial views.
I don't pretend to understand how Nielsen handles their statistical issues, but it is standardized.
Nielsen data absolutely doesn't include Netflix streaming -- so in terms of how many actual viewers there are of different ages etc, could there be more viewers of a certain age that aren't represented here? Sure there could. But it doesn't matter. Because all the viewing for all the CW shows is measured exactly the same way. Each of the shows has the same error (if you want to call it an error, it really isn't)
I don't know what people are trying to prove with this information, but the point of the data is how well Supernatural is doing compared to the other shows across the various age groups.
Generally not as well as Flash, better in some, worse than others with Arrow & TVD and generally better than everything else.

I don't think it means anything in terms of what the writers will 'do' to attract any particular audience. Compared to the rest of the CW, they're already doing fine.