View Comments
Page 2 of 2
Catching Up With Current and Former BTS Personnel
Honoring our fabulous crew as the year wraps up.

#SPNFamily! I wrote this movie. Based on the book that inspired #SPN. It's basically the #SPN prequel. Now you can own it! Scour for all the #SPN Easter Eggs I put in: spells, wards, yellow eyed demons. Please watch & RT & spread the word! Thanks! #clockblockers @housewithaclock https://t.co/kCpoRdGxtk

Show Tidbits
7 ‘Supernatural’ Deaths That Still Make Us Cry
A Note to Teen Girls (and Myself): It's Okay to Love the CW's Supernatural
Supernatural – Top Five Episodes of Season Six
The Supernatural Cast Played 'Who Said It?' and the Struggle Was Real for Misha Collins
‘Supernatural’ Cast on Season 14, the 300th Episode, and the Show’s Record-Breaking Legacy
for earlier coverage of the 300th episode see
and spoilers from the event are in Spoilery Interviews From the 300th Episode Celebration
Conventions, Cast Appearances and Fandom
Jason Manns and Paul Carella Announce UK Tour

Can’t wait for this with The Big Mann @jasonmanns, our first UK Tour together. More dates to be announced but get your tickets for Salford and London noooowwww....https://t.co/mHxHirbjr1 pic.twitter.com/Jirr3aiENE

If you can't make it in person, you can stream the upcoming Jacksonville convention 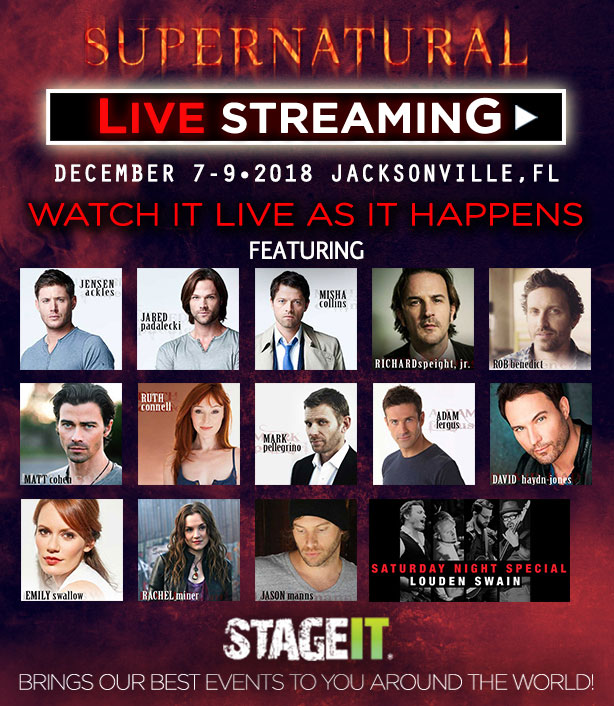 Some of you were hoping Jeffrey Vincent Parise would be bringing his book to #AHBLXmas4 Secret Santa, but unfortunately it's out of stock. However, he will be bringing some amazing prints to the show! You'll be able to pick them up during the autograph session at his table. pic.twitter.com/oDiBUEJGar

Several Supernatural stars will be appearing at Sci-Fi Valley Con.

James Patrick Stuart (Dick Roman) will be part of a General Hospital convention.

This crew is back by popular demand & heading to Pittsburgh & Arlington March 2nd & 3rd. Hope to see you there for a photo and a laugh or two. pic.twitter.com/DWJ2ld6BTe