View Comments
Supernatural in the news this week.
Catching Up With Current and Former Cast Members
Interviews
Nerd Alert News had an Interview with ‘Supernatural’ guest star Sarah Dugdale(Wendy Hanscum) 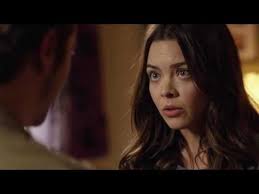 Later in the week Matt Cohen and Finola Hughes [made an] hysterical appearance on The Ellen Degeneres Show
Rob Benedict (Chuck/God) was interviewed by An Actor, a Comedian and a Musician Walk into a Bar

Kurt Fuller (Zachariah) was interviewed in episode 84 of the Yes, Have Some Podcast It’s time for Episode 84 of Yes Have Some Podcast: Talking Ghostbusters 2 With @TheKurtFuller! https://t.co/WLwWIefuJZ

Shoshannah Stern is being interviewed in conjunction with her new series This Close.

Rick also released a video on his song "In the Land of the Blind"
Jensen Ackles and Daneel Harris were interviewed by Joe Barlow of KXAN Danneel and Jensen Ackles Talk Family, Beer and the ‘Supernatural’
Other Projects
From Nerds and Beyond Richard Speight, Jr. (The Trickster/Gabriel) Starring in New Film ‘Driven’

Show Subscriptions for "Chad Lindberg's BADASS Celebrity Ghost Hunt" are available NOW @ https://t.co/6iNDlifApK !! You can purchase Season 1 or per Episode Ala Carte! Subscribe to @thehauntedspace for ALL Haunted Space content! @NickGroff_ @ElizabethSaint_

Miscellaneous
Two of the movies that Kathryn Newton was in this past year, Ladybird and Three Billboards Outside of Ebbing, Missouri, have been nominated for Oscars.

Osric Chau has joined his cast members from Dirk Gently's Holistic Detective Agency in promoting the tie in Graphic Novel.

See  another side of David Haydn-Jones (Mr. Ketch)  in this Character and Sketch Comedy Reel 2017
Hit 'Next' for more news.

HELL YES I SHOULD. Get ready for Marie Curie, Hedy Lamar, Wendell Scott, the Salem Witch Trials, Robert Johnson and OH SO MUCH MORE.

We lost one of the family this week Cyrus Yavneh, producer for series 1-3 died. Condolences to his loved ones.

I’m sad today to write of the loss of another friend. Cyrus Yavneh started out as an assistant director on LOU GRANT, won a Christopher Award for BABY, and produced 24 and the first 60 episodes of SUPERNATURAL. He was the sweetest of men and superb at his job. That says it all. pic.twitter.com/QTPgyjle5d

Rest in peace, Cyrus Yavneh. If you all liked the pilot and first 3 seasons of #Supernatural, take a moment to think about Cyrus, because he was a big part of it. Thanks for everything, sir. #SPNFamily @jarpad @JensenAckles https://t.co/HhSFVHNsBJ

The final part of Adam Glass's Rough Riders series is scheduled to be released.

So fortunate to get to tell the third and final chapter of this book. It's been a dream come true writing this. Please check it out. I'm bringing my #SPN influences to this story. https://t.co/omyHgYQI4d

Show Tidbits
Buddy TV asks How Long Will Sam's Depressive Slump Last on 'Supernatural'?
Hypeable covered Wendy Hanscum and more potentially ‘Wayward’ women who survived ‘Supernatur
Conventions, Cast Appearances and Fandom
Nerds and Beyond tells us How ‘Supernatural’ and Creation Entertainment are Destroying the Convention Competition
The First Fandemic Tour Show Will Now be Sacramento in June, with Norman Reedus, Jeffrey Dean Morgan and More
Want to attend a Supernatural Convention from your own couch? Stageit will be streaming live panels form the Seattle, Washington Convention 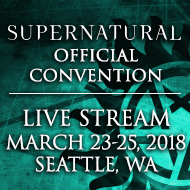 For anyone in the CA area looking to redefine Valentine's Day make it our own and make it about sharing some kindness with friends, I'll be in Santa Monica gathering donations, sharing poetry, spreading love...all that hippie stuff I love to do. Love to spend the day with you! ? pic.twitter.com/GJwwlIMR1n

Lindsey McKeon will be at EyeCon

"Imagine a future moment in your life where all your dreams come true.”

Purgatory 4:
Gil McKinney is going to give an amazing accoustic concert on Friday evening (June 1)!!! :)
Tickets for the concert will be available on Friday June 1 at the sales table at Purgatory 4 for 17,50 Euro :)
Entry to the concert is not included in ANY ticket. pic.twitter.com/LGFSt5Axjp