View Comments
Supernatural around the Web this week.
Catching Up With Current and Former Cast Members
Interviews
Supernatural Meme Star Michael Adamthwaite (Security Guard Bill - The Girl with the Dungeons and Dragons Tattoo) Talks War for the Planet of the Apes 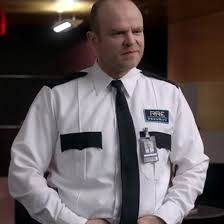 Celebmix ran an  Exclusive Interview: Gil McKinney (Henry Winchester)discusses his debut EP ‘How Was I To Know’ and Supernatural
David Haydn-Jones (Mr. Ketch) shares the story behind his Represent campaign when he tells the story of his Nana.

If you're interested in my Nana's story@alzfdn was gracious to share our story in their Quarterly:https://t.co/mInUl71N9a pic.twitter.com/G0MqGzfb1c

Other Projects
We will soon be able to hear Louden Swain's new album Pre-Order Louden Swain’s Live Album ‘Saturday Night Special’ on ITunes and Google Play Music Now!.
Rob Benedict (Chuck/God) was part of the final episode for this season's look at the Bachelorette in Will You Accept This Rose?. He does not seem to have been happy with the outcome

Oh boy, oh boy - #KingsofCon has landed in the U.K.! Join @AmazonVideoUK today and watch all of S1! https://t.co/rfgiXUrLGn pic.twitter.com/d075uaRd5h

Pure Fandom tells us 7 reasons why Netflix should pick up ‘Kings of Con’ season 2.
Kendrick Sampson (Max Banes) will be part of the new Showtime series White Famous.

Here's the trailer for the project

Check out the trailer for #WhiteFamous, premiering on 10/15. The comedy is from exec producer @iamjamiefoxx & stars @JayPharoah. pic.twitter.com/yldntSHX1N

Miscellaneous
Osric Chau (Kevin Tran) has a new fan. This Is Why Kevin Allison Is Crushing on Supernatural Actor Osric Chau

Chad Lindberg (Ash) had a reunion with an old friend. Jesse From The Fast And The Furious Reunites With His Jetta 16 Years Later

Apparently, we are open for two more weeks! https://represent.com/store/marksheppard get on it!

Jared and Jensen's bromance got a shout out this week.

Hit 'Next' for more News.


Catching Up With Current And Former BTS Personnel
Adam Glass was interviewed on his comic Brik in Why ‘Brik’ Is A Comic Unlike Any Other.

Meghan Fitzmartin, Supernatural Showrunner's Assistant, is a quarterfinalist for this year's Creative World Awards for her Original Television Drama Abramelin Institute. Congratulations Meghan!
Show Tidbits
Screen Rant told us
Definitive Proof That The "Supernatural" Fandom Has A GIF For Everything
Supernatural had two entries in TV Fanatic's 13 Times We Screamed at the TV in Anger!,
Business Insider included Supernatural in its list of the 20 most popular TV shows of 2017 so far. Thanks to cheryl42 for the heads up.
Castiel was included in TV Fanatic's list of 15 Characters That Were Almost Killed Off.
Supernatural Clue Featured On Jeopardy Thanks to deb ryzley (@DRyzley) for the tip
Samantha Smith gave us a peak behind the story of Sam and Dean carving their initials in the MOL table

#tbt I was there the day this happened, and I have to admit it was pretty cool. #supernatural #ButBoysYouRuinedTheFurniture pic.twitter.com/6DfEhpFNBT

@SamSmithTweets Did Jared and Jensen actually carve this themselves or was it the set or prop department?

They did! They were totally grounded. https://t.co/4iMmD1YUFS

Conventions, Cast Appearances and Fandom
Nerds and Beyond posted How the ‘Supernatural’ Fandom Changed My Life

I'm so pumped to be speaking at @createcultivate Seattle on 9/9! Join me and get your ticket here! https://t.co/j1CdrDQcW4 pic.twitter.com/xfh2j8Mwis

Meet @MitchPileggi1 September 8-10th at @horrorhound Indianapolis! A bunch of #MitchsPledgies will also be there! Come hang out with us! ? pic.twitter.com/MJInGH94Ts

Cross Roads attendees need to be careful, as Death will be joining us next May! Julian Richings is the ninth guest!https://t.co/AQvyIeFTkd pic.twitter.com/thrjwIOaav

It's Tuesday! That means it's new episode day for #WaywardNerds! Although, this week is a 2 EPISODE WEEK! https://t.co/sUnUCWE6Wr #SPNFamily pic.twitter.com/t7Cmeuk1yz