Current and former members of the crew of Supernatural continue to make a splash in the entertainment world.

McG in Talks to Direct 'Masters of the Universe' Reboot .

Sera Gamble is in the public eye as she promotes her new series, The Magicians over at TV Addict  Sera Gamble Talks Book Changes and Quentin & Julia’s Diverging Paths.

Robbie Thompson brings a real world issue into the world of comics as Marvel Teams Up with Wounded Warrior Project for ‘Venom: Space Knight’ Story.


Supernatural‘s Jeremy Carver will pen the pilot and serve as an executive producer.

Deadline Hollywood has more on this pilot. SuperWiki gives some idea of how it could affect Supernatural


The return of X-Files brings a great tribute to Kim Manners. Alice explains in The X-Files' Reboot Remembers Two of Their Own .

Taylor Cole goes from dead to undead as she Books Arc as Badass, In-Demand Vamp on The Originals.

Timothy Omundson has been promoting Galavant. TVLine reports that he Sings 'Crazy, Silly' Galavant's Praises, Shares How Psych Rekindled His Love for Musical Theater . He opened up with TV Guide in the interview Galavant's Cast Shares Their Musical and Social Media Obsessions

Jeffrey Dean Morgan visited The Late Night With Seth Meyers to talk about his new role on The Walking Dead.

Not only do we have two shows with Lucifer being topside, we also have 7 degrees of Mark Sheppard as the show Lucifer debuts.


Read all about the OTHER show  with Lucifer in Alice's article on TVFTROU.

Misha Collins has a new tee shirt for his Random Acts Charity on Creation Stands.

PopSugar tells us how Jensen Ackles Benevolently Gifts the World With Another Stunning Rock Performance and gives us this video of Whipping Post.

Then PopSugar reminded us of 16 Times Jensen Ackles's Singing Melted Our Hearts.

Then they published Here's Every Steamy Supernatural Picture You Could Ever Want. PopSugar has been good to us this week.

MTV asks Which Jared Padalecki Character Should Be Your Boyfriend?

Jared gave us a delightful look at look Jensen behind the scenes of Supernatural.


.@JensenAckles and me keeping ourselves awake on set... #SPNFamiIy #AKF pic.twitter.com/pfCqy64wS2

Buddy TV lists 'Supernatural': 9 Key Moments Leading Up to Castiel and Lucifer's Big Moves in 'The Devil in the Details''. They also list the Best 'Supernatural' Quotes from ‘Into the Mystic’.


Home Geekonomics is a series that features the best in geeky home decor, food, and DIY. Each week will focus on a specific fandom and highlight the best of geek for your home and everyday life.


For the week of January 18-24 two CW shows (Flash and Arrow) made the top ten Nielsen Twitter ratings. Let's work to see if we can push Supernatural into the top 10.

Proving our international appeal, Supernatural made the Dhaka Tribune's list of Most popular TV series’ of 2015 in Bangladesh.

The OdysseyOnline did a feature on Supernatural Fandom, The Movie in A 'Supernatural' Experience Caught On Film.

Alaina Huffman and Lisa Berry appeared in this week's Supernatural Season 11 Episode 1 Review & After Show - AfterBuzz TV to add their insights into our show.

Fangasm gave their report on Jaxcon Friday and Saturday!. For those of us who can't make it to a convention, it' so great to get these reports.

The goal of this community is to document the videos from the cons, hopefully of full panels. With the use of notes, time codes, and tags, it will provide useful information for anyone looking for a certain moment, quote, or event from a convention.


There are so many years of conventions to document, and once this is done it will be a great resource.

Interestingly, Lisa Berry was already a Supernatural fangirl before she got cast. She seemed quite knowledgeable about the show's history.

# cheryl42 2016-02-01 13:35
Thanks again for putting all this information together. I love AfterBuzz they are such huge fans of the show and get great guest stars to appear. It is always a fun hour. I won't ever get tired of Jensen making Jared laugh. Rock Star Jensen is so cool too. Still a little worried about Carver leaving. Dabb is such a hit and miss writer and tends to sometimes get caught up in soapy type melodrama (Bloodlines, TWLB). This season the pace and scripts have been tighter so I will remain optimistic (not my usual thing) for now. 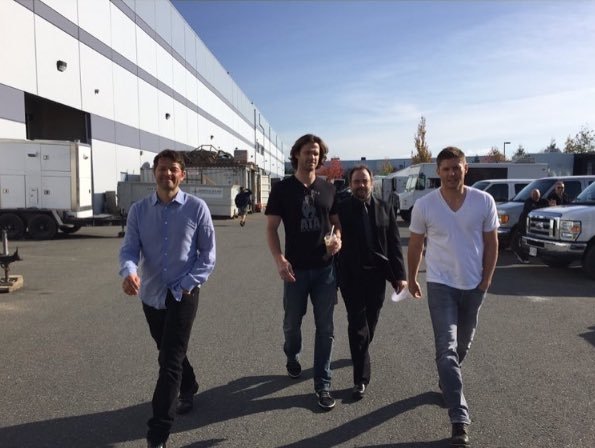 # Didi 2016-02-02 20:46
Season 9 got really good ratings. I have no idea why. I mostly DVR'd that season just so I could fast forward through all the brother angst. I just couldn't take it. The not-Ezekeil possession and Dean/MOC/jackas s, co-starring Sam as Dean's whipping boy. So painful to watch.

# Didi 2016-02-03 00:49
I stand corrected about s9 ratings. I just checked - they were solid until The Purge. After the The Purge they started to tank. Nice job show, alienating the audience.

# Barbara Maake 2016-02-02 21:34
I know E. I was shocked when I saw that. The only thing I could think is that he was excited about the challenge of playing MOC Dean and then turning into a demon at the end. I think it's different for the actors in terms of what is most interesting and fun to film, as opposed to what is most enjoyable for us to watch. While I considered S 9 the worst season ever (all because of the atrocious second half), Jensen maybe felt it contained opportunities for better drama and more challenging acting. The second half was very Dean-centric, and MOC Dean from S 9 was more interesting than dreary, grim Dean from S 10. But I still can't believe that he preferred it to every other season! Shocking!

# BoGirle 2016-02-02 21:38
I know!! I was like huhwha? Season 9 is the worst season by far. Poor plotting, poor pacing, terrible story decisions, biggest waste of good ideas, contrivances left and right....It's about a mile below season 8, which is my second to last favorite season because of the "Year of the Dog" bullshit. Season 8 saved itself from being the worst in the second half.

# eilf 2016-02-02 22:05
Even though Season 9 was atrociously unfair to Sam as a season, Jared was excellent as Zeke / Gadreel and he really enjoyed playing the angel. They (J2) do so much filming that I assume they don't play 'episodes' or 'seasons' they play scenes - they are all out of sequence when they film them so all they can do is whatever they are given - and half the time I bet they don't even know which scenes get in and which ones get cut.
Considering how excited he was to play the angel stuff in that season you would imagine Jared would also occasionally mention it as a favorite but he doesn't. I think by the end of the season he realised how angry the fans were over his part of the storyline though he may not have gotten how many people were pissed on his behalf - about how he and his character were being thrown under the bus. ... Also Season 9 was when the Destiel frenzy was at it's worst (which was great for show-buzz though TERRIBLE for the show because of fandering (my new word :D) ). But you could tell at the first half of the season Jared thought that they were going to play the storyline sympathetically to Sam as well as Dean. Which they should have done. It was a total seachange in the second half, it was like the writers all got amnesia about the first half. It became clear that Sam was going to be held up as unsympathetic while Dean was MOC'ing all over the place.

Honestly though, for Jensen, what wasn't to like about Season 9?

Also Season 9 was when the Destiel frenzy was at it's worst (which was great for show-buzz though TERRIBLE for the show because of fandering (my new word :D) ).

eilf, I love your new word, and it has occurred to me that if Destiel ever became canon there would be fandemonium. (I know, pretty awful. :p)

# Sharon 2016-02-03 00:17
Season 9 was this shows most shameful treatment of Sam it is a season I would cheerfully salt and burn. However to Jensen it clearly had some sort of appeal that escapes me.

# cheryl42 2016-02-03 10:28
Yes I think he enjoyed playing something different than just the same Dean character. Same goes for Jared. I know he is proud of his work as Ezekiel/Gadreel possessed Sam. They both did a fantastic job. I think (my own personal opinion) they all thought that the awful backdoor pilot was going to be picked up and S10 was going to be the Swan Song for the show. There were reported rumors of Frequency being picked up by NBC, Singer was rumored to wanting to retire, Glass was looking at other projects, I'm assuming that Dabb was going to go on to produce Bloodlines. I think everyone just lost their focus. The second half of S9 was a disaster.
Both of the J's have said that S9 was a favorite for them. Although Jared has said (he never criticizes the show or anyone really) that he didn't like the dialog in the Purge even though he understood why Sam said it. I think they enjoyed the acting challenges from that season.
Refresh comments list
JComments