View Comments
Hard to believe a whole year has gone by and the 2nd Salute to Supernatural Vancouver Con was about to commence.  I was pretty excited because there were even more guests lined up for this yearâ€™s con than last year AND we were getting some of the crew out to talk to us.  This was gonna be cool, we were going to hear about â€œhow the show is madeâ€ kind of stuff.  Wicked bonus. 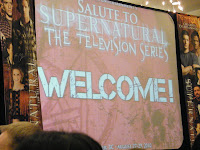 Sadly, I arrived late.  Last year I was lucky to have received money for my birthday that I saved up for the con.  This year, no such luck.  So I had to try to reduce my economic foot print.  Because of that, I missed Katherine Boecherâ€™s panel all together and most of Matt Cohenâ€™s.  Part of that was because I was travelling, part was because I seemed to have gotten an incorrect schedule of events and thought no one was going on until 2:30pm.  Sigh, oh well, what can you do.

However, the last couple of minutes of Mattâ€™s panel were good.  A fan asked if he had been warned about â€œusâ€ fans being crazy.  He said, we werenâ€™t crazy, he was crazy and we were nothing like him.  He thinks we are great fans.  That got a round of applause.  And then he was done.  Lucky for me, Matt happened to have a second panel on Saturday so more about him later. 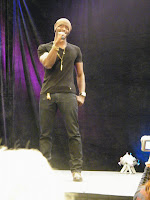 Next up was Aldis Hodge.  Heâ€™s such a sweetheart.  I think he honestly is surprised we love him so much even though, he killed Sam...  But, how could we not.  Heâ€™s so nice and so much fun.

He talked about Leverage and answered questions about his character from that show.  Video games were brought up.  He was asked what he was currently playing and discussion revolved around being a geek for a bit. Oh, and the poor boy was cold.  That morning in Vancouver it was cold and raining and apparently, when he left LA it was 105 degrees F - and he didn't bring a jacket.  He warmed up though.

(For the rest of the report, including details of the Richard Speight Jr. and Jason Manns panel, go to Tigershire's blog right here.)